This project includes the stabilization and storage of three historic ship remnants excavated at the Robinson Landing Site (archaeological site 44AX235).  The overall goal of the project is to transport and store the timbers in Ben Brenman Pond (4800 Brenman Park Dr.) in a manner that preserves the possibility of future study and conservation when adequate funding and/or a location for permanent storage or display is available. Planning for the storage of the historic ship timbers began shortly after the ships were discovered in 2018. The implementation and fieldwork phase began in January 2021 and was completed in May 2022. Three interpretive panels will be installed at Ben Brenman Pond in 2022. Regular monitoring inspections will be carried out first in May 2023 and then every five years following the first annual inspection. 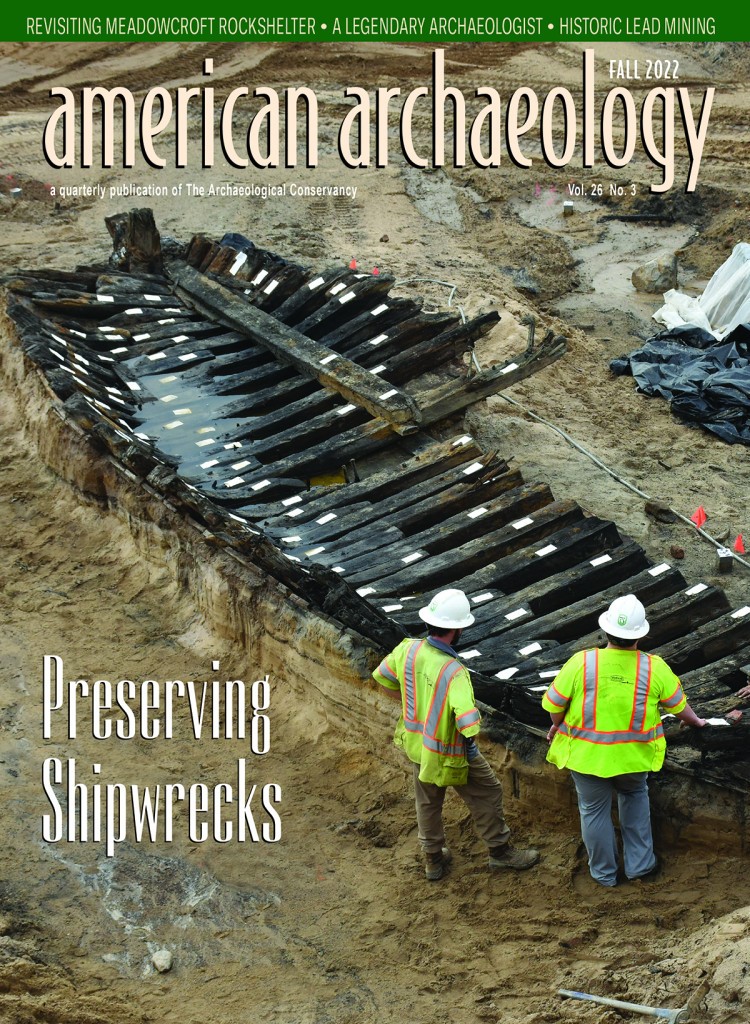 Return to the Depths , by Olivia Anderson, Alexandria Times, May 5, 2022

Caring for Alexandria's Merchant Fleet , Out of the Attic, Alexandria Times, May 26, 2022

Remnants of 18th-century ship found in Alexandria to be preserved at Ben Brenman Park, WJLA, May 9, 2022

In 2018, Thunderbird Archeology, a division on Wetlands Studies and Solutions, Inc., in coordination with the City of Alexandria and the Maryland Archaeological Conservation Laboratory (MAC Lab), excavated three ship hull remnants from EYA’s development site called Robinson Landing. The discovery of the massive hull remnants resulted from implementation of the Alexandria Archaeological Protection Code. Passed by City Council in 1989, the code requires developers to hire archaeological consultants to conduct investigations prior to construction on land with the potential to contain buried sites of historical significance. Alexandria Archaeology, a division of the City’s Office of Historic Alexandria, oversees the code.

Early Alexandrians used these wooden ship remnants in a ca. late 18th century effort to make new land, extending the shoreline to the deeper channel of the Potomac River and creating a viable international port. These artifacts are tangible pieces of Alexandria’s maritime heritage, representing the City’s transformation to a bustling post-Revolutionary War harbor. The ships provide an important and unparalleled data source for understanding 18th century ship building and the land-making process.

Archaeologists, conservators, and EYA worked together to record and dismantle the hull remnants from 44AX235 into individual timbers. The City of Alexandria transported those timbers to a warehouse where they have been temporarily stored in large pools of water and kept wet and stable. A team from the Conservation Research Lab (CRL) at Texas A&M University, documented each of the over 1,000 timbers using a 3D laser scanner. From these individual scans they created physical and digital models of the three ship remnants.

A team from several city departments, archaeologists, and a Maryland Archaeological Conservation Lab conservator began developing a medium-term solution for storing the timbers shortly after they were excavated. After carefully considering several alternative solutions and locations, the team decided that Ben Brenman Pond was the most feasible option. The timbers were wrapped and transported to the pond site. Once there, a contracted archaeological consulting firm with scientific divers placed the timbers in the pond and recorded their location and site. Three interpretive signs located around Ben Brenman Pond will explain how the ship remnants were excavated, documented, and preserved. A future goal outside the scope of the current project is the selective conservation of some timbers that will not be placed in the pond. These will be retained and kept stable in a large pool of water for ease of access.

Learn more about Archaeology on the Waterfront.

In May 2022, the team successfully relocated over 1,000 timbers from temporary storage at a City warehouse facility to the southern portion of the Ben Brenman Pond site by carefully wrapping, tagging, and transporting the timbers. Once delivered to the site, AECOM’s scientific divers placed the timbers in the pond and recorded their individual location.

During the ponding process, Alexandria Archaeology with the assistance of the Maryland Archaeological Conservation Lab chose a selection of ship and wharf timbers for conservation. The conservation process will include submerging the timbers in polyethylene glycol and then freeze drying them to remove any remaining water. This treatment stabilizes the artifacts for future exhibit and study. The timbers will be used to interpret the city’s rich maritime heritage, providing tangible examples of 18th century ship building and land making techniques.

AECOM is a multi-national engineering, architecture, environmental, and cultural resources management firm with decades of experience with maritime resources and large‐scale archaeological projects. AECOM provides services for governments, businesses, and organizations in more than 150 countries. As a fully integrated consulting firm, they connect knowledge and experience across their global network of experts to help clients solve their most complex challenges. AECOM and its legacy companies began supplying cultural resources services in 1977. AECOM has completed a wide variety of cultural resource management projects across the United States for government and private sector clients.